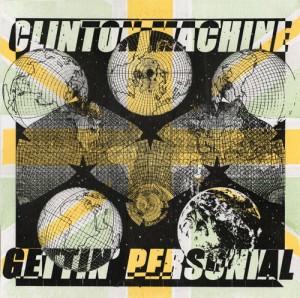 In 2008/2009 I wrote and produced Clinton Machine “Gettin’ Personial”. In 2010 the record was co-released by Inyrdisk in Toronto and Fluorescent Friends, and in 2011 I toured it with Andy White and Owain Lawson.

KZSU 90.1 Stanford University, CA
Reviewed 2010-11-12
“Noise rock, sludgy at times, rocking, dissonant, upbeat. Low fi fun, blissful, not too serious. Distorto buried male vocals, desperate guitars, pounding drums. Elements of grunge even. Sounds like: Swans as a Nirvana tribute band with members of Sonic Youth and The Swirlies using Neutral Milk Hotel’s equipment but The Melvin’s amplifiers, and everyone is just about to OD on heroin, including the audience. Capice?

No FCCs. Every fucking track is a masterpiece.

Weird Canada
Inexplicably gnarly wall-of-soundgarden fringe-freak explosion. Clinton Machine pushes you through a vortex of bludgeoned 90s metal-zone, burnt politics, and low-end attitude that will confound and bewilder, careening your understanding of the sanctity of modern living. Gettin’ Personial is the audible collection of bedroom nightmares conjured by distant uncles lurking in every basement apartment below you. Listen with caution. Beautifull tri-color silk-screen cover. GRIPPETH!

Foxy Digitalis
January 6, 2011 By Travis Bird
Canadian Blake Hargreaves has been involved in a number of notable projects over the past several years, including Jim Slay, Dreamcatcher, Thames, and Cousins of Reggae. All of these have crisscrossed the underground world, with challenging releases exploring skuzzy electro, noise, and even guitar-and-drum blues noise. So, even though this is a rock record, his debut as Clinton Machine may be seen as a sort of coming out of the woods, a surprising turn that successfully captures even more aspects of his musical personality.
For those most familiar with Hargreaves, the acoustic guitar that opens the album on “Thing 2” will sound extra bizarre, and the feeling may continue even after the tune bursts into a stomping groove full of the fuzzed-out walls of guitars and thick drums that are typical of the rest of the album. But it will fade, yielding to an undeniably solid set of rock tunes. With riffing and tempo inspired by the rougher aspects of grunge and the lo-fi Guided By Voices vein, the “backing band” (apparently actually all Hargreaves himself) captures the sneering heave and aggression of Nirvana or even at times the bluesy glam of (as the exalting press release claims) a band like T. Rex in a concoction of genre that Hargreaves refers to as “smoke.”
All of this is stretched and warped in what is an increasingly common manner—the obliteration of vocal as lead instrument, instead being used as a textural one. This focus on voice over lyric fulfills the voice’s role as a musical instrument—the connection in the song only based on the dynamics of the band as a whole—and the vocals may only serve as a marker of time, like a drum fill, to signal the passage or beginning of a section. In some situations, especially in the chillwave corner of the bedroom synth-pop slumber party, this vocal strategy can be to be the only mark of the nowing of the sound—the rest of the instrumentation and arrangements marking songs that weren’t written in the ‘80s only by coincidence.
And indeed, as seems to be the style nowadays, Hargreaves wails, mumbles, and barks over the grooves, with hardly an understandable line. But with their diverse rock touchstones, the quality of the Clinton Machine tunes makes them work the vast majority of the time. “Gemini” is an upbeat rocker reminiscent of Weezer, with a gutturally atonal guitar solo that could stand with any U.S. Maple record. The truncated “What” finds Hargreaves unleashing pretty good Black Francis shrieking, and “Sun Dog” features a great chord progression that juxtaposes guitar changes against static basslines.
The most puzzling aspect is without a doubt the final track, “The Cat’s Meow,” a ten-minute solo guitar jaunt that might be described by some as a “freakout,” but really plays more as a kind of wandering around with a guitar, a non-narrative dirge that isn’t compelling texturally or otherwise. I’m tempted to say that this was placed here for one of two reasons—either to make the album longer, or to remind the listener of Hargreaves’ origins as a more experimental musician, which it would do in a rather unflattering way if this is the case. Either way, the track seems like an afterthought, the only blemish on what is an exciting new direction for a very dynamic artist.
Inyrdisk / Fluorescent Friends
8/10″