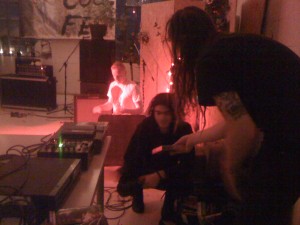 Cool Fest Eleven marked the return to La Brique and the absolute perfection of the event. A policy of ‘bring your own cans’ was introduced, which solved millions of problems. The concept of a guest chef, using the kitchen to sell food to festivalgoers on their own, independent of the fest, was discovered, and former Ithaca impersaria Natasha Li Pickowicz created dishes expanding the field of programming at Cool Fest to the taste buds. The concept of a lounge at the back of the live room that seats about 5 people with a small television playing David Lynch movies all weekend was pioneered. The first ever VHS DJ set in the world ever was pulled off. Performances were outrageously good. We had a Yoga class with live music. Xarah Dion resumed co-booking and organizing, along with Carlo Della Motta. Nearly everything worked perfectly. Because that is how we roll.